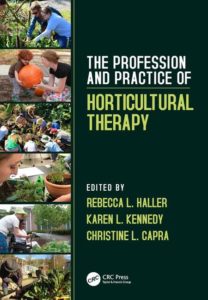 Class content is the same for each section. Only dates and time zones different.

I am a relative new comer to the field of horticultural therapy (HT) and am a recent graduate of the Horticultural Therapy Institute (HTI), March 2006. This article details how the HTI course work and homework assignments were the catalysts for my development of a grant proposal for a pilot HT project with survivors of sexual violence.

My third HTI course, HT Programming, was held in June 2005 in Ft. Collins at the Gardens on Spring Creek. Our guest instructor was Karen Kennedy, HTR. During the first day of her instruction, she told us about her job coordinating the HT program at The Holden Arboretum (outside of Cleveland) and an HT program she conducts for individuals with chronic pain or terminal illnesses, weekly sessions for 6 weeks. I thought about other populations who might benefit from a similar program – survivors of sexual assault. I had been volunteering on the fund raising committee for my county’s (Orange) rape crisis center (OCRCC) and have supported the Center for many years. They offer support groups to clients 4 times a year, each group meets weekly for 8 weeks, and addresses similar topics: shame, self-esteem, anger/rage, grief, coping skills, giving and receiving, and happiness. The Center has never offered a support group that incorporates the use of HT.

When I returned home, I shared my idea with the director of the HT program at the North Carolina Botanical Garden (NCBG), where I have volunteered for almost 3 years. She was supportive of the concept and we talked about how to implement such a program. I then met with OCRCC’s director whom I have known socially for several years. She was interested and asked me to speak with the Center’s client services director who is in charge of the support groups. She asked me to give a presentation to the support group facilitators on HT at an upcoming meeting in November 2005. I asked the NCBG HT director to assist me and we met with the group for an hour, gave an overview of HT, conducted an HT activity with them, and gave them printed materials on some HT activities. They expressed a lot of interest in HT and its potential for the Center’s clients.

…the HTI coursework helped me take a thought, put some structure to it, and take action to see it to fruition.

My final HTI course, HT Management, was soon to be in session (February 2006). We knew from the start of class that we would have a homework assignment requiring us to develop a grant proposal for an actual project we wanted to implement. I decided to focus on furthering my idea of an HT group with survivors of sexual violence. One of the best things about the assignment was the limit on length (5 pages), although initially I thought, “how can I get all the information required for the assignment on an HT project in so few pages?” The page limit forced me to distill the essential information and present it in a clear and concise manner.

Rebecca Haller required us to develop a timeline and lessons for our proposal. (We only had to submit one HT activity in detail; all others had to be described in a paragraph.) During the course, we had some class time to discuss possible HT activities to meet the various program goals students had for their potential programs. While my project will focus entirely on the psychological needs of clients, classmates talked about the applicability of these needs with the populations they intend to serve. For example, the topic of anger: while the source of this feeling will differ, addressing it through HT is applicable to a survivor of sexual violence, an elderly person put in a nursing home, or a person who has recently lost a limb or essential physical function/ability. Upon my return home, I met again with the NCBG HT director to discuss my ideas for a group of seasonal activities to be conducted in late fall 2006, the last support group the Center would offer for the calendar year.

Another assignment in the course, given by guest instructor Pam Catlin HTR, required us to identify local resources in various areas of support to our HT program: collaboration, financial, tools, plant materials and supplies, and advice. I knew that the Carolinas Chapter of AHTA gave 3 grant awards annually at their fall conference. I decided to use my homework assignments as the basis for a proposal to my regional chapter. My budget was limited to $500 for the 8-week program I proposed; that is the largest amount of a CCAHTA grant award. I revised my CCAHTA proposal to address a few concerns Rebecca raised and submitted it at the end of July.

If funded, the grant would allow the OCRCC to try a new methodology with a long-standing Center service.* The Center’s mission statement is to “stop sexual violence and its impact through support, education, and advocacy.” A support group using HT would address the issues of posttraumatic stress syndrome and grief, two areas where HT has been used previously. More importantly, it would address quality of life issues. An HT support group would supplement the Center’s services and could possibly result in a new program offering on a regular basis. Creating ways for individuals whose lives have been affected by sexual violence to engage in sustainable self-care practices is important to the Center’s work; using horticulture therapy is an ideal way to do this. Longer-term, the Center would be a great place for enhancing an HT practice by using the extensive yard that is available and currently underutilized for some outdoor projects.

The pilot project will be a wellness program, aimed at improving the general well being of the clients participating in the support group. The program’s goals are: (1) introduce the psychological topics typically covered in support group sessions through the use of HT; something that has not been done before, and (2) evaluate the use of HT as a methodology for use in support groups with survivors of sexual violence. I will work with an OCRCC staff member to co-facilitate a support group of no more than 10 people, most likely women . The group will meet for 2 hours a week during evening hours for 8 weeks. Each week during the first hour of the group, I will conduct an HT activity that will help introduce one of the topics typically addressed in the Center’s support groups. Participants will be asked to rate their mood before and after each week’s session on a 5-point scale I developed for this purpose. During the second hour, the Center staff person will lead the group in a discussion about that topic from a clinical perspective. The two of us will meet weekly to review the session and decide what modifications, if any, we need to make for the following week. At the end of the 8 weeks, participants will be asked to complete the Center’s evaluation for the group as well as an HT evaluation I developed. The staff member and I will also evaluate whether or not the stated program goals were met.

In sum, the HTI coursework helped me take a thought, put some structure to it, and take action to see it to fruition. The assignments lead me step-by-step in a very practical way; they were not just tasks to complete to get a grade. If you are reading this and considering enrolling in the HTI, the usefulness of other HTI coursework to the real world also applies. The HTI curriculum lives up to this stated objective of the HT certificate program by providing opportunities for practical application of HT knowledge.

I’m grateful to my HTI classmates for their ideas and shared enthusiasm for HT, the OCRCC director and client services director for their interest and willingness to try a new methodology with their support groups, the NCBG HT director who has encouraged my interest in HT and challenged me to see its potential, and to my husband for his complete support of my new-found passion. The CCAHTA awards will be announced September 18 at the annual conference. I will pursue other funding sources if CCAHTA does not come through; I am committed to this pilot HT project with survivors of sexual violence. Eventually I’d like to develop a similar set of activities to be done during the springtime. Green Blessings!

*Christine received a $500 grant award to implement her pilot HT project with survivors of sexual violence.

View the recording of a recent live webinar: